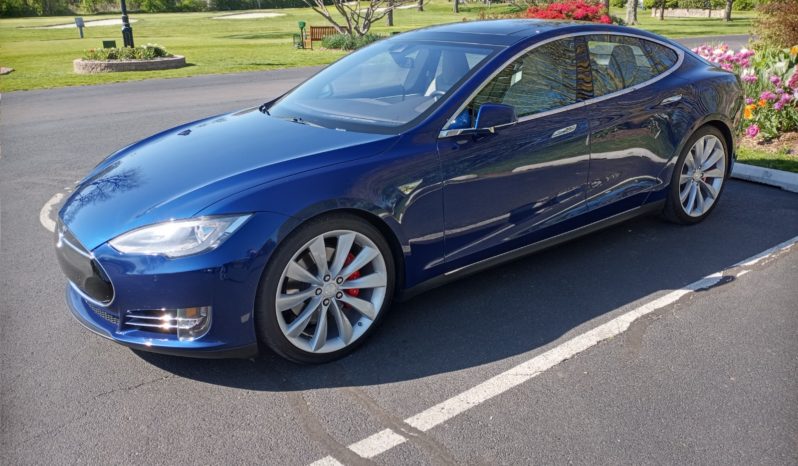 Tesla’s performance Model S in the 90 kWh trim line is the P90D. With its larger dual-motor powertrain, the all wheel drive P90D was capable of 0 to 60 mph acceleration in just 2.8 seconds and had nearly twice the torque of the non-performance version of the sedan. However, driving range was slightly reduced compared to the 90D, coming out to around 270 miles per charge of the lithium ion battery pack. The P90D was discontinued in 2017, replaced with the Model S 100 trim line.

Every year of the Model S P90D that rolled out of the plant was hardware capable of Tesla’s Autopilot driving assistance system beginning with Autopilot 1.0 (AP1) in 2015. AP2 and AP2.5 followed in 2016 and 2017, respectively. Full Self Driving software and Enhanced Autopilot, though not found on the 2015 P90D, were both available for purchase with the Model S by 2016.

A change in paint options was evident during the years of the Model S P90D’s manufacture as Tesla simplified it’s exterior options. Metallics in Blue and Green were only offered on the 2015 P90D. Solid White and Titanium Metallic were removed from the list of options by 2017. Solid Black, Metallics in Midnight Silver, Obsidian Black, Deep Blue, and Silver, along with Multi-Coat paints in Red and White, were available during all years of the Model S P90D and are the most easily found colors on listings for pre-owned Tesla Model S 90 trim vehicles.

While Black and Tan interiors were offered through all three years of the P90D’s manufacture, the option for Gray was replaced in 2017 with Ultra White (only seen during one year of the Model S). Dash options to complement these colors came in Carbon Fiber, Piano Black, or Wood designs (Dark and Figured Ash, Glossy and Matte Obeche, and Lace). Synthetic Vegan Leather seating material was available by 2016; all years of the P90D saw seating options in Multi-Pattern Textile or Nappa Leather, and pre-owned Tesla buyers should note that Tesla no longer offered textile or real leather for seating on the Model S 90 trim after 2017.

Pre-owned Model S P90D vehicles are still out on the road and a valuable part of the Tesla family today. Check out our used Tesla listings to sort and filter by a number of Tesla-specific criteria that matter to you as make or break options on your next used Tesla Model S purchase. Easily connect with other Tesla owners to find your next ride with Find My Electric, the Ultimate Tesla Marketplace.