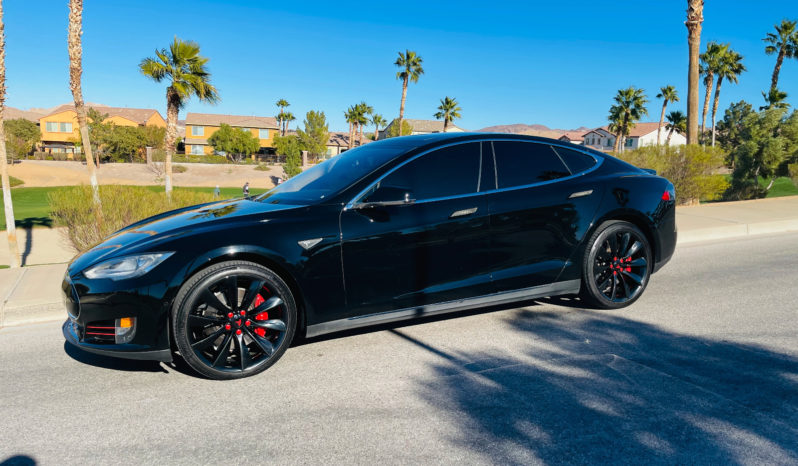 Outstripping the road performance of all other 85 kWh Tesla Model S sedans, the P85D’s all wheel drive design catapulted drivers from a standstill to 60 miles per hour in a mere 3.1 seconds. Driving range of the P85D was a respectable 253 miles per charge of the lithium ion battery pack, more than enough for reasonable commutes. However, with a top speed of 150 mph and a 463 hp, 687 lb-ft torque dual-motor drivetrain, the P85D was built for an unforgettable, road-gripping joy ride from charge to charge.

Interior options on the P85D changed only slightly over the years from its first manufacture in 2014, with standard options in Tan, All Black, and Gray. In fact, only the seating choices varied: Vegan Leather was first offered alongside Nappa leather and Multi Pattern Textile in the year that the P85D was discontinued (2016). The Tesla Model S dash options remained the same through all the P85D customizations, available in Carbon Fiber, Piano Black, Dark and Figured Ash Wood, Lace Wood, and Glossy and Matte Obeche Wood.

Depending on driver’s preference, wheel options for the Model S P85D were available in both 19” and 21” designs, with the 19” base wheel coming standard. Handling was excellent in the 19” wheels, which were also offered in styles Cyclone, Slipstream (Silver and Sonic Carbon), and Tempest. 21” wheel options added an extra bit of handing for the already sporty grip of the P85D and included the Arachnid (in Silver or Black), Twin Turbine (also in Silver and in Sonic Carbon), and Turbine designs (in Silver and Gray).

Tesla’s minimalist style in its Model S offerings remained the same in the P85D as in previous years, but pre-owned Tesla buyers would do well to notice that paint options varied through each year that the P85D was offered. 2014 saw Metallics in Brown, Blue, Green, Gray, and Silver, with Solids in both Black and White and Multi-Coat colors in Red and Pearl White. 2015 dropped the Green and Brown Metallics and added Deep Blue, Obsidian Black, Titanium, and Midnight Silver, while 2016 kept the previous year’s added colors but dropped Metallics Blue and Gray.

Tesla’s premiere driver-assistance system, Autopilot, was included with the Tech package in all years of the Tesla Model S P85D’s manufacture, and all years of a pre-owned Tesla P85D are hardware capable. Version 1.0 of Autopilot was offered on the 2014-2015 models of the P85D, and Autopilot 2.0 was available by the time the 2016 P85D was built.

Looking for a specific used Tesla Model S P85D configuration? Got a paint color or interior that you just can’t live without? Check out Find My Electric’s listings to help you sort through each Tesla model and trim to fit your needs. Our proprietary search allows you to filter based on a number of Tesla-specific criteria, leaving you with only the best selections of pre-owned Tesla vehicles available.