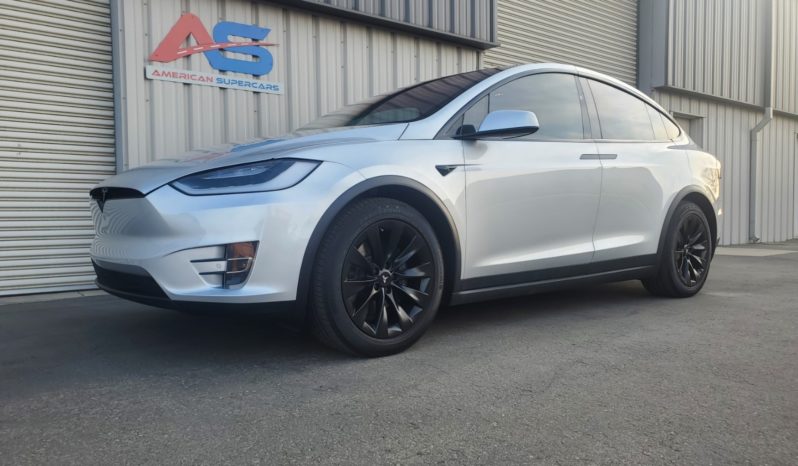 Coming out at the top end for battery capacity on the first production run of the Model X, the 100 kWh lithium ion battery, dual motor 100D delivered a driving range of up to 295 miles per charge. With a modest 0 – 60 mph acceleration of 4.7 seconds (still physically jarring, but not as dramatic as the Tesla Model X performance cars), the all wheel drive Model X 100D made family rides in a sport utility crossover a lot more interesting.

While the Falcon Wing rear door assembly remained a contentious feature in the Model X that critics either loved or loved to hate, the doors lent a sci-fi cool factor to the 100D that got the Model X into the public’s eye faster than reports of its stellar safety rating. The Falcon Wing doors also allowed greater access to the rear seats of the vehicle, a bonus for families with small children. Five, six, or seven seat configurations could be ordered with material options in genuine Leather, Multi-Pattern Textile, and synthetic Vegan Leather. The spacious interior of the Model X 100D centered on it’s large windshield and 17” touchscreen control panel. This modern design was complemented by color schemes in All Black, Black and White, Cream, Tan (2016 only), and Ultra White (2016-2017). In addition, the dash was configurable in earlier Wood designs (Matte or Glossy Obeche, Figured or Dark Ash, Oak and Lace), Oak Wood in 2109, Piano Black, or Carbon Fiber.

With every Model X coming off the assembly line coming hardware capable of Tesla’s driver’s assistance program, Autopilot, buyers were able to purchase the Full Self Driving (FSD) or Enhanced Autopilot (EAP) packages along with the 100D or as an upgrade later. The hardware installed on each year of the Model X 100D changed throughout its manufacture, including AP1 and AP2 IN 2106, AP2 and AP2.5 from 2017-2018, and AP2.5 AND AP3 in 2019.

The sleek lines on the exterior of the Model X 100D provided an incredibly low drag coefficient, increasing the efficiency of each charge. Further adjustments to efficiency or performance could be made through customizations to the Model X wheels. A 19” design in Cyclone was available with possible increases in efficiency and tire durability, though it was reportedly most often used to accommodate a thicker winter tire. The 20” base Wheel design in Slipstream (Silver) was further customized in Helix (Silver) or Sonic Carbon designs, and offered decent grip and efficiency. A noticeable reduction in efficiency has been noted in the 22” Wheel (available in a Silver or Onyx Black Turbine design or Two-Tone Slipstream in 2019), but this size also increased performance and cornering ability.

Paint colors complementing the minimalist look of the wheels and exterior of Tesla’s Model X 100D came in a conservative palette that narrowed over time. Metallics in Deep Blue or Midnight Silver, Multi-Coat Paints in Red or Pearl White, and Solid Black remained as options throughout the manufacturing years of the Model X 100D, but other colors were limited to earlier production runs. Signature red was available in a limited number of purchases on the first Model X 100D, and 2016 was also the only year for Solid White and Titanium Metallic paints. Obsidian Black and Silver Metallic also vanished from Tesla’s paint menu after 2017.

On the lookout for a used Tesla Model X 100D? Check out our owner listings for pre-owned Tesla vehicles to increase your search efficiency with our Tesla-specific filtering and sorting options. Connect quickly and securely with other Tesla owners and enthusiasts on Find My Electric’s Ultimate Tesla Marketplace to catch the best deals on your favorite used Tesla options today!