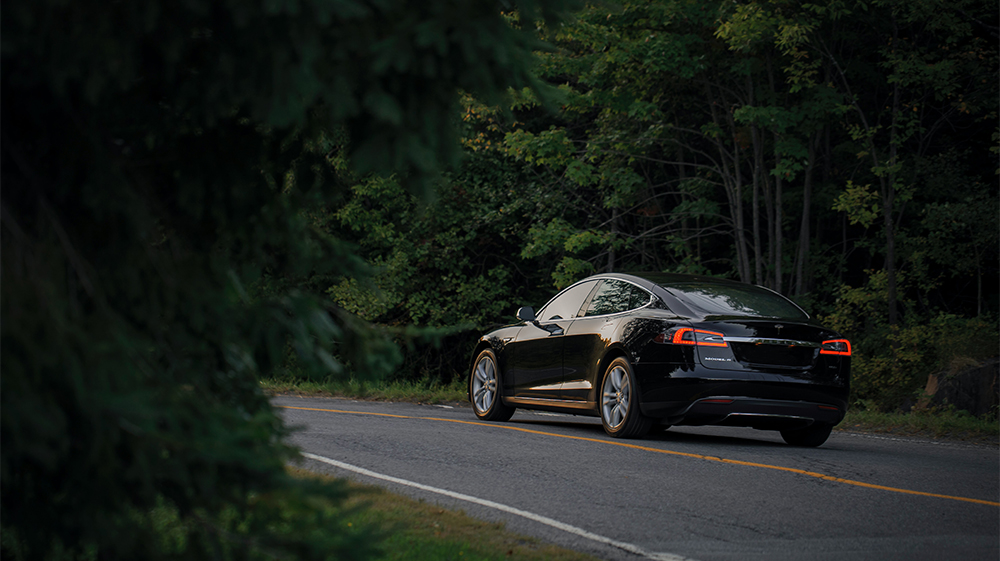 In today’s installment of our Tesla Features Explained blog series, we’re going to explore a different kind of behind-the-wheel experience in a Tesla (technically, it’s an under-the-car experience, too). Welcome to the realm of Tesla’s Smart Air Suspension (SAS), where ups and downs are a software-controlled part of life!

For those who don’t know, vehicle air suspension is a method of shock absorption by means of rubber bellows (or airbags) filled with compressed air to create a cushioning effect. Air is distributed through hoses to the bellows on each strut to adjust pressure, allowing the vehicle to raise and lower either through manual controls or automatically (as is often the case for self-levelling in trucks that have suddenly received a payload). Tesla’s Smart Air Suspension features sensor-calibrated air suspension tech coupled with programming that can adjust the suspension’s height based on GPS location, speed, and driving conditions.

While Smart Air Suspension is no longer an option on newer Tesla vehicles (we’ll briefly discuss the replacement tech a bit later in this post), this feature is prominent in the earlier Model S and Model X. Buyers in the market for a used Tesla need to be on the lookout for potential issues with the suspension system on each vehicle that they are considering. It also doesn’t hurt to look into the pros and cons that exist between the Smart Air Suspension option and standard coil spring suspension.

So what makes Tesla’s air suspension smart? Well, Tesla made good use of their “car as an app” strategy to create a suspension system that adapts to the vehicle’s physical location (GPS geofencing) and its speed via software. Along with the ability to manually adjust the height of the car through the vehicle’s control panel, drivers can expect the car to save the GPS location of the vehicle for each adjustment. Tesla’s Smart Air Suspension software then automatically adjusts the height of the car when it encounters a saved data point, such as a steep driveway, a carwash, or bumpy dirt road. Note: these data points can also be manually removed from the control panel. If you happened to show off the different Smart Air Suspension settings to someone in a friend’s driveway, you can delete that data afterwards so that you don’t have to drop to Low every time you drive up to visit.

In addition to data point adjustments, automatic adjustments to height occur for different speeds in order to reduce drag and provide more ride stability. The speed thresholds for these adjustments have changed over the years thanks to over-the-air updates; currently, Tesla’s Smart Air Suspension will reduce height from Very High to High at 22 mph, and from High to Standard at 35 mph.

The Model S was the first to receive Smart Air Suspension as an add-on option in 2014, and that system became standard for all Model S trims from 2017 to mid-2019. Height settings for the Model S are Low , Standard, High, and Very High, with a clearance range from about 5-7 inches. The actual adjustment heights provided by the Smart Air Suspension system vary by model (and, we assume, by the type of tires currently installed), and the Model X’s numbers are slightly different. In addition to the Low, Standard, High, and Very High, the Model X also has a setting for Very Low, and the clearance range is about 5-9 inches. There’s also a Jack Mode on the Model X for repairs, but you can’t use it for driving.

Fun fact for those wondering what kind of damage the bottom of a Model S could take if the suspension is adjusted too low for the driving conditions: after getting feedback on concerns about battery safety, Tesla added a titanium shielding panel (plus a few other structural elements) to the underside of the Model S that was capable of shattering a concrete block at driving speed. It just goes to show that damage received when scraping the bottom of a Model S isn’t even in the same ballpark as damage received by something like a Prius under the same conditions. Ouch.

Does the Model 3 or the Model Y Have Smart Air Suspension?

The short answer is no, neither the Model 3 nor the Model Y has been manufactured with Smart Air Suspension. Read on for the long answer.

While Tesla tested the Smart Air Suspension system out on some development versions of the Model 3, no Model 3 has come off the manufacturing line with Smart Air Suspension installed. As far as we know, there are no plans to add this feature to the Model 3 at this time. The likely reason for this is that the Smart Air Suspension option would add to the production time and cost of the Model 3, something that Tesla has been trying to avoid while moving the Model 3 as close to mass market manufacturing and pricing as they can. The situation is similar for the Model Y, and though plenty of rumors and hints that there will be some kind of adjustable suspension for both of these vehicles in the future, nothing has solidly surfaced. Tesla has not released any further info that suggests that a future upgrade is in the works.

When Tesla completed development of their new ‘Raven’ drivetrain, they upgraded the air suspension to what they called Adaptive Suspension, which is now standard on the Model S and Model X as of 2019. We’ll be adding a more in-depth look at Adaptive Suspension in an upcoming blog post; for now, it’s enough to add that the upgrade mainly improved ride comfort, adjustability, and visual display details.

Does the Model S Smart Air Suspension Have Reliability Problems?

While the Smart Air Suspension system is a really cool feature involving the kind of Tesla tech that makes driving a Tesla both more fun and more comfortable, the possible financial drawbacks on an older pre-owned Tesla can be pretty steep. Not every Tesla with Smart Air Suspension has had major problems with it, but air leaks are a common theme for service center visits. At the extreme end of the spectrum, damage to the vehicle when a leak is bad enough for a bellows to completely deflate can be very costly to repair. On the plus side, an air suspension typically doesn’t hide the fact that it’s having issues. When something is off in the air lines, you can usually hear it or notice the effects pretty quickly. With a coil spring setup, though, the springs can deteriorate silently until they epicly fail, which can cost a lot more to repair than just the spring.

If you are looking at a used Tesla with Smart Air Suspension, it’s always worthwhile to take a listen for odd hissing sounds and loud, grinding noises from the compressor. You should also check for uneven distances between wheels and wheel wells and note the time that it takes for the vehicle to rise and lower. These things can indicate a problem with the suspension and help you make an informed decision on whether or not the deal you are being offered is worth the potential repair costs.

Want to get a good feel for the price ranges and options on a pre-owned Tesla Model S or Model X with Tesla’s Smart Air Suspension? Try a search through our owner listings! Unlike other sites that make it impossible to differentiate between suspension types (or Autopilot hardware, wheel size, Ludicrous mode, and more), Find My Electric’s filters make it easy to select only the options you want and to sort them based on your priorities. Cool features like Smart Air Suspension are what make owning a Tesla worthwhile, so we made sure to do the digging for you to keep your search results user-friendly and feature-informed. Check out our used Tesla listings today to see what’s available!