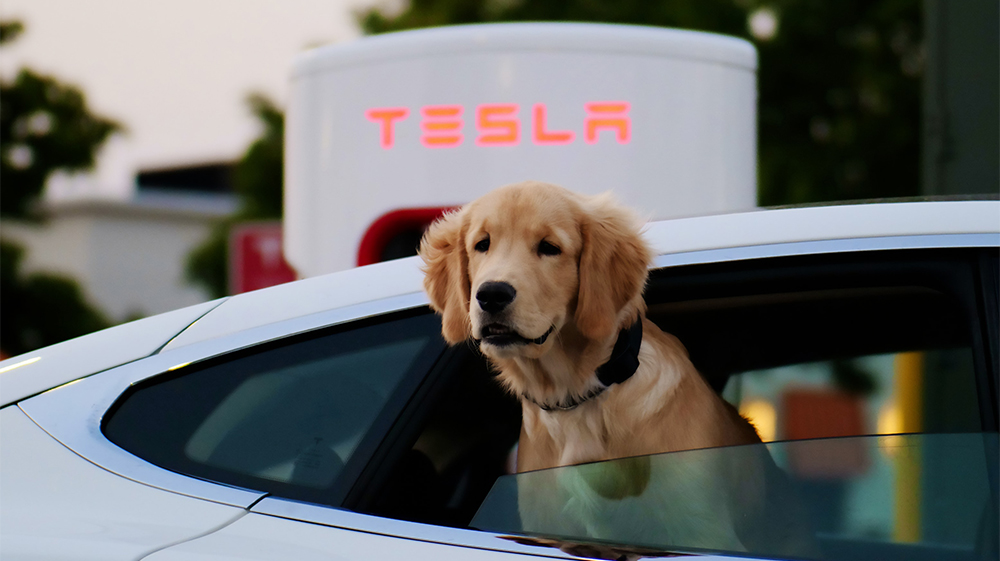 Many people have never heard of “Dog Mode,” but it’s an incredible feature unique to Tesla electric vehicles. Essentially, it allows the air conditioning to remain on when the car is “off” in order to keep any pets left in side cool-as-can-be.

However, Twitter user @rahulsood recently noted a bug with the manual controls and Dog Mode. He Tweeted directly to Elon and Tesla saying “It’s hot as hell in Seattle. Today I used dog mode and luckily I kept the app open, to my horror the car was 85 degrees and climbing! Dog mode only works if in auto, if you manually set the fan and leave the AC turns off.”

Obviously, this is a big problem. Luckily for Rahul’s dog, he was watching the app and was able to go out and attend to him. Had he not been watching, this could’ve been quite dangerous for that poor pupper (who, by the way, is named Enzo—what a cool dog name, especially if it’s after Enzo Ferrari)!

Well—not Tesla, and not Elon. Within hours and on the same day, Elon replied “Fixing…” and within a couple days, Tesla had pushed an official fix to all vehicles equipped with Dog Mode.

Tesla’s official update stated under “Dog Mode Improvements” that “Once enabled, Dog Mode will now restrict any manual climate adjustments except for temperature.”

And so it was done. Just like that, the CEO personally responded to a customer, Tesla implemented (and tested) a fix, and pushed it out to customers in just days—all so the doggos were safe once again.

Why This Action Matters so Much for the Auto Industry

There are a few reasons why this was more than a quick, routine fix or a standard update.

First of all, it shows that Tesla is really paving the way with their ability for Over-the-Air (OTA) updates—and no one else is even close. The majority of vehicles being produced today require trips to a dealer’s service department in order to flash multiple modules with dealer-only scan tools and other proprietary software. There’s no other auto maker in existence that can update their cars and push fixes the same way Apple updates an iPhone—think about that for a moment.

Second, it shows that Tesla not only cares but also reacts quickly to customer concerns. This isn’t the first time that they’ve pushed an update quickly to help struggling customers. Just last winter there was an issue with Model 3 windows getting stuck in icy climates. Tesla created, tested, and pushed a fix all within a very short amount of time. The ability for OTA updates coupled with the agility of Tesla’s hardware/software teams is unparalleled, and it should really put the entire auto industry on notice; this is what a disruptor looks like folks.

Finally, this really shows how involved Elon is with the company and with customers. He’s received a lot of criticism in the last year for a variety of things (we’re very pro-Elon at Find My Electric, BTW), and much of it, in our opinion, has been unduly harsh. We’re talking about the real-life Tony Stark here people…who also Tweets with customers about their dogs getting too hot—pretty much the coolest thing ever.

If you’re looking for a Tesla with Dog Mode but are trying to save a much money as possible, check out our used Tesla listings—it might just be the start of a new, amazing journey for you AND your doggo!