4 Reasons Why You Should NOT Sell Your Tesla to Vroom 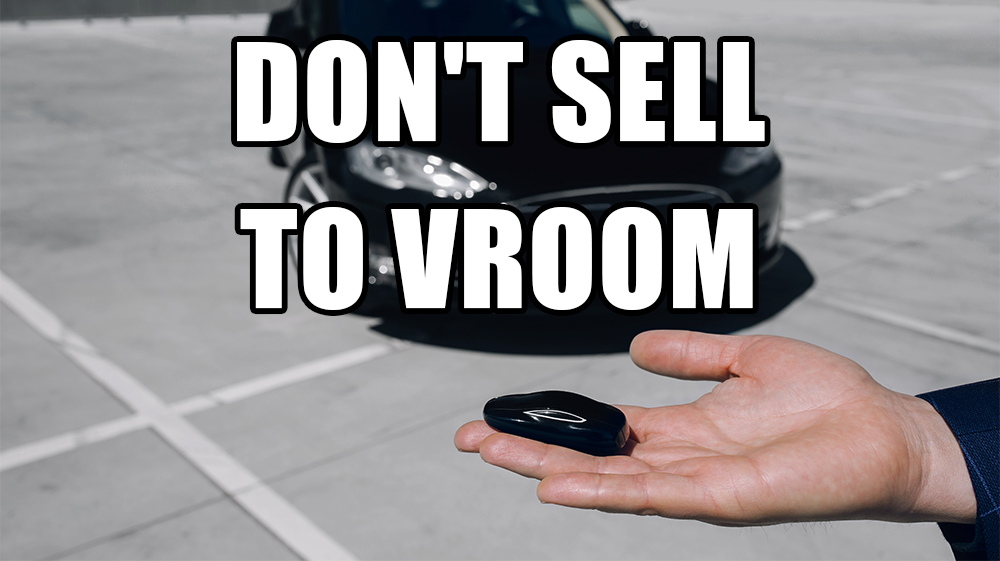 Thinking about selling your Tesla to Vroom? They make it look so easy! And we all like easy, right?

But there are a few things Vroom doesn’t tell you about selling your used Tesla through their service.

Let’s check out four reasons why selling a used Tesla on Vroom doesn’t make the most sense (or cents) for most Tesla owners and enthusiasts and why selling on a used Tesla marketplace like Find My Electric is best.

Reason #1: You’ll Get Less Money for Your Tesla

Vroom is a car dealership, not a charity organization. Obviously, they operate on margins and need to make a profit. In a sense, they deserve the extra cash: they offer people a company name and website to do business with, and they provide a system that explains how buying or selling a car with them will work.

Vroom will even pick up your car, at your house, and at your convenience (most of the time)!

But who else deserves the extra cash for your used Tesla?

You do!
It’s your Tesla.

One of the reasons that people choose Vroom is that the process is supposed to be easy. But you, the seller and source of their product, happen to be the one paying for that ease. Vroom will be looking for a big fat profit margin from selling your Tesla, particularly since Tesla is considered a luxury brand (we prefer “luxury experience”). That’s a big fat profit margin that should honestly be yours if you are willing to do a little legwork (some of which Find My Electric can help you with for free, but more on that later).

Ready for the next reason not to sell your used Tesla with Vroom? Spoiler: at Find My Electric, it’s one of our major pet peeves (and it should be one of yours, so read on).

Everybody in car sales will tell you that the secret to getting the best price for a used car starts with knowing your car’s current worth on the market.

When you’re ready to sell your Tesla, a significant part of the value of your car can come from your Tesla’s software options. Options that you purchased. With your money.

Vroom is great at KBB values and happily gives out decent quotes for the average used Camry with their algorithm. They aren’t so great at estimating the value of a used Tesla with Enhanced Autopilot (EAP). Or Full Self Driving (FSD).

With Vroom’s business model, there’s no room for negotiation. One offer: take it or leave it. That’s a great idea for a lot of cars, but not for cars with a lot of extra software features, like Tesla. If Vroom doesn’t know what a used Tesla’s Autopilot version or hardware is worth up front, you won’t be getting top dollar by accepting their algorithm’s offer.

One more consideration for your Tesla’s Autopilot value when selling through Vroom: in a few instances, Tesla has reportedly removed paid-for software when their cars changed hands through dealers. Their reason for doing this isn’t entirely clear, but you should be aware that dealers like Vroom may not give software purchases like EAP or FSD any credit on their offers thanks to the uncertainty surrounding the software’s transfer value. If they can’t sell it, they won’t pay for it (even though you did).

As far as we know, purchased software does transfer to the new owner in a private sale of a used Tesla, which is a great reason to sell your used Tesla yourself instead of selling to Vroom.

Need a glimpse into the world of Autopilot and what each Autopilot feature and package might be worth? Check out our Ultimate Guide to Tesla Autopilot  for more info.

What about other lesser-known used Tesla features that may command a higher price from the right people (Tesla enthusiasts!) which Vroom doesn’t really consider? That brings us to our next reason:

Reason #3:  Vroom Doesn’t Understand What Rare Tesla Options on Your Car Are Actually Worth

We’ve talked about Vroom’s one quote, no haggling policy, right? Selling your old Nissan Altima without negotiating on the price with Vroom makes sense.

Selling your used Tesla to Vroom, though? They don’t even know Signature Red when they see it!

Exclusive paint colors like Signature Red, features like the elusive Panoramic Sunroof on the Model S (okay, it’s not super elusive, but we still like it), and perks like transferable Free Supercharging have different value for the Tesla community than they will to the average used electric car buyer. Because Vroom has such a broad vehicle focus, they don’t take rare or community-valued Tesla features into account when giving an offer on your Tesla. To Vroom, Signature Red is red, Autopilot is a catch-all name for all versions and levels of AP, and transferable Free Unlimited Supercharging? Vroom actually can’t even offer it to buyers (Free Supercharging doesn’t transfer through dealerships), so they don’t care.

And if Vroom doesn’t care about what the Tesla community values, they won’t offer you a premium price for your Model S with Free Unlimited Supercharging, Signature Series Model X, or (dare we say) Founder’s Edition Tesla Roadster.

Speaking of the Tesla community, we’ve got one more reason not to sell your Tesla to Vroom. Here it goes:

Reason #4: You’re Not Helping the Tesla Community by Selling to an Uninformed Middleman

Let’s say you’re considering selling a Model 3 to Vroom with no AP, no special colors, no transferable Free Supercharging, and so on. It’s pretty much a no-frills ride (except that it IS still a Tesla) that Vroom should be able to make a decent offer on with their algorithm. In that case, why not Vroom your Tesla?

Because it lets Vroom set the price of entry into the Tesla community.

Here at Find My Electric, one of our biggest hopes for Tesla has always been that their revolutionary vehicles will become more accessible to more people over time. More people driving electric cars means a brighter future for our planet.

There are plenty of people out there who would already be a part of the Tesla Community if the price point were more accessible to them. They rely on used Tesla sales to participate in the experience of owning and driving one of Tesla’s incredible electric cars (and to experience accelerating like a bat out of hell, if we can be honest).

That’s where a Tesla listing service like Find My Electric (that’s us!) comes in, and where you can do the most to bring people into the Tesla fold while still getting top dollar for your Tesla.

Instead of getting less for your used Tesla by selling to Vroom, you can get a better return on your investment while allowing someone else to invest in a Tesla for less than Vroom’s middleman markup.

The Tesla community also benefits from things Vroom can’t sell, such as transferable Free Unlimited Supercharging on a Model S or Model X (as we’ve said before, it only transfers in a private party sale under the right circumstances), or AP, EAP, FSD…you know what we’re talking about.

The Best Alternative to Vroom for Used Teslas? Find My Electric!

“But I just want to sell my Tesla!”

Great! That’s exactly what we can help you do!

First and foremost, we’re the best used Tesla listing service out there. We know exactly how to get our ads in front of the best buyers on the internet. At the same time, we’ve networked with dealerships that actually know Teslas and are willing to make you the kind of offer that Vroom can’t (more on that in a minute).

Here’s what Find My Electric can do for you:

1. Provide the most Tesla-informed platform for selling your used Tesla

Unlike Vroom, we’re fully aware that Tesla’s builds are pretty diverse and don’t rely on traditional year-by-year feature rollouts. When you say Raven, R80, Midnight Silver Metallic, or AP 2.5, we know what you’re talking about. Our listing service highlights these features and many more to advertise your Tesla in the most accurate way possible.

At Find My Electric, we also know the benefit of advertising your Tesla’s software, so that both you and your buyer know what your Tesla is actually worth before you even start negotiations.

2. Help you to connect quickly and easily with potential buyers

While we love our hands-off interface that lets you have full control over your used Tesla ad and communication with potential buyers, we do our best in the background to filter out spam accounts and drop-kick would-be bad actors from the site. That leaves you an uncluttered space to interact with your buyers on a peer-to-peer basis.

There’s also another no-nonsense way to sell your used Tesla with us: our Instant Cash Offer system. Using the same info you use on your Free or Featured listing, we connect you with Tesla-informed dealerships that we personally interview and approve. Sales through the Instant Cash Offer system are done 100% online, from virtual inspections to pickup from your driveway. Quick, easy, and simple.

3. Get your listing seen by the people that matter most: the Tesla Community

Unlike Vroom and other multi-branded sites where listings are seen by whoever may casually stop by, Find My Electric has an audience that is only (and dare we say fanatically) interested in exactly what you happen to be selling: a Tesla! We built Find My Electric specifically for Tesla enthusiasts and the Tesla community, so you know that the eyes on your ad are also the most likely to see your Tesla’s true worth.

Bonus: we don’t even charge for our basic listings.

And if you aren’t sure whether getting the highest return for selling your Tesla by dealing with buyers yourself is worth it, you can always request an Instant Cash Offer. Our network of verified dealerships are Tesla people, too, and we make sure they know their stuff.

We’re stoked that you are already a part of the Tesla community, friend. But friends don’t let friends Vroom their used Teslas. Let us help you find your ideal buyer, get top dollar for your Tesla, and strengthen the Tesla community while we’re at it.

Ready to sell your used Tesla for TOP DOLLAR? Get in front of thousands of eager Tesla buyers in minutes at Find My Electric! Click here to get started!