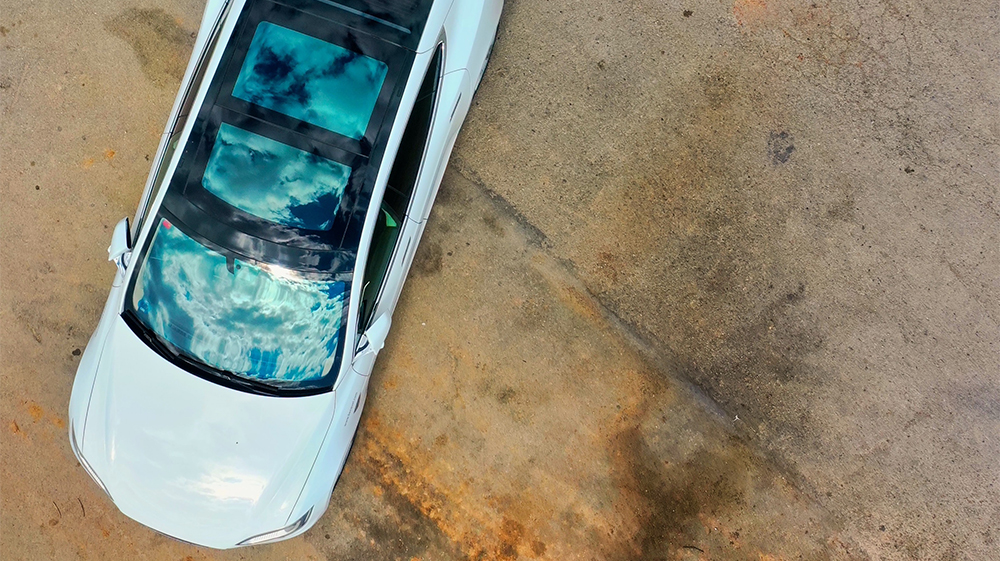 Welcome back to another installment of Tesla Features Explained, our blog series dedicated to getting you up to speed on the ins and outs of Tesla’s features—past and present! Today’s subject: the discontinued (but awesome) Panoramic Sunroof!

Fresh air, unfiltered sunlight, the option to wave like a celebrity through the top of your car; why not have a sunroof when you can get one? OK, so there are pros and cons to having a what amounts to a mechanical porthole in your ceiling, but we think that Tesla’s Panoramic Sunroof option is worth a look. Also, since some confusion is circulating out there among used Tesla listings about what a Panoramic Sunroof on a Tesla actually is, it’s worth knowing the details so you can be sure about what you’re getting before you buy.

Buckle up for a short history lesson…

The Panoramic Sunroof made its debut on the Model S in 2012 along with only one other option, a traditional aluminum Body-Colored Roof. Fully-adjustable settings from the touchscreen menu (or the steering wheel in some cases) allowed the Panoramic Sunroof to open to any point from just enough to vent to fully open. Basically functioning like a spoiler roof (also called a tilt and slide), Tesla’s Panoramic Sunroof popped up and slid back along its tracks on the top of the car while a small windscreen (designed to reduce drag) deployed at the front. Though many buyers were quite happy with this setup, the Panoramic Sunroof was unable to avoid the reliability issues that plague sunroofs and moonroofs in general. We’ll detail some of those in a minute.

In 2018, Tesla stopped offering the Panoramic Sunroof as an option on the Model S, favoring their fixed Glass Roof offering instead. A necessary manufacturing change, it’s true, but terribly impractical for driver’s side passengers who need a good 360-degree firing view during a zombie uprising. Theoretically, anyway.

Finding a used Model S with a Panoramic Sunroof is still possible, so let’s take a look at a few benefits that this option offers (you know, besides ease of undead warfare). Bringing fresh outdoor air into the car through a sunroof is a lot quieter than through the side windows, especially at highway speeds. Long road trips can feel less claustrophobic with an open sunroof, increasing the spaciousness of the cabin and letting in the full light of the sun rather than tinted light through Tesla’s heavy glass (or, in the case of the Body-Colored Roof, no light at all). Plus, there’s just something sci-fi cool about pushing a button to make your roof hatch open.

Now for a few cons. Though Tesla does sell sunshades for its vehicles after purchase, there is no sunshade built into the car itself. The temperature difference isn’t all that noticeable in mild climates, but plenty of owners have reported temperature issues in hotter climates and have added aftermarket tinting to cut down on sunlight. Next, the motor mechanism itself tends to break down over time, sometimes resulting in a sunroof that won’t fully open or won’t open at all. In some cases, extra cabin noise from rattling components and air whistling from bad seals have been reported. Finally, the most vexing issue that has cropped up again and again involves water leaking through the roof during a heavy rain. This was largely due to a manufacturing error that caused the sunroof to damage its own seals whenever it was opened or shut; for that, Tesla ended up issuing a recall. Mitigating other leak issues has caused headaches for owners and service centers, and only vigilance and good maintenance practice seems to keep the leaking and noise at bay.

On that sour note, we still think the Panoramic Sunroof is a neat feature. After all, Tesla isn’t the first and only manufacturer to deal with sunroof mechanical or sealing issues, and there’s just something fun about having nothing between you and the sky during a long drive.

Does the Model 3 Have a Sunroof? What About Model Y? Model X?

Tesla has never produced a sunroof for the Model 3, Model Y, or the Model X. This is likely a direct result of the reliability issues they experienced with the Model S Panoramic Sunroof.

The Model X can’t really accommodate a sunroof for exactly the same reason it can’t take a roof rack: its Falcon Wing door assembly takes up all the roof space.

Does Tesla Still Make a Model S with a Panoramic Sunroof?

Nope, not even off the menu! However, there have been rumors about a new version of the sunroof thanks to some wording in one of Tesla’s recent patent applications. The patent primarily concerns electrical tint and LED lighting internal to the glass, but there is a short reference to an application of this technology in a sunroof. While this is probably just typical patent-speak that leaves the idea open and protects it from use by other companies in that particular application, who knows? Maybe a future Model S could still be an effective part of your zombie apocalypse fleet!

How to Find a Model S with a Sunroof

If you’ve made it this far in the blog, you know that in order to find a Model S with a Panoramic Sunroof you’re going to be looking into the realm of pre-owned Teslas. Right now, that world is made up of the Tesla Used Inventory and private sales.

The most expensive option is typically going to be the Tesla Used Inventory, but Tesla does provide a 145 point inspection and a Used Vehicle Limited Warranty. Currently, Tesla doesn’t offer actual pictures of the used vehicle you might be interested in (they used to, but that’s changed for reasons Tesla hasn’t explained), but you can get some peace of mind from the manufacturer’s inspection and warranty process. For a price, that is.

Next, you can check for a used Model S with a Panoramic Sunroof through private sellers. Typically better deals can be found here, but they come with a consistent problem. Remember that name confusion issue we mentioned earlier? Where people can’t seem to keep the Panoramic Sunroof and the Glass Roof straight? Well, guess what: private sales and private listing websites have the same problem. Panoramic Glass, Sunroof, All Glass, who knows? To many of them, the word “sunroof” covers all of the above.

That’s where we come in. At Find My Electric, we know the difference! If you want to find a used Model S with a Panoramic Sunroof, our filters can help you locate one in seconds. Bam! No more digging through unhelpful, uninformed web listings. We always display real photos of the Teslas in our listings, so you can get a visual check on the features you’re interested in. Plus, contacting the owner of the listing is fast, easy, and secure, so you can find out all the nitty-gritty details about their Tesla’s Panoramic Sunroof yourself (like how many zombies they’ve…well, never mind). Check out our used Tesla listings today to get started! And if you’re looking to sell your Tesla, we can help out with that too!